'I Shall Not Be Silent' Documentary Available for Free Viewing! 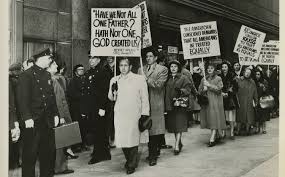 From Sunday March 29th to Sunday April 5th, stream the documentary about civil rights activist and Newark legend Rabbi Joachim Prinz, I Shall Not Be Silent, for free.

Rabbi Prinz escaped Nazi Germany in 1937 and became a civil rights activist in America, where he spoke at the March on Washington in 1963 just before Martin Luther King, Jr., proclaiming "America must not become a nation of onlookers. America must not remain silent!"

Producers R Squared Productions and distributor Menemsha Films are making the film available for free during the COVID-19 crisis.

See the film in tandem with the depiction of Rabbi Prinz as a character in HBO's adaptation of Philip Roth's The Plot Against America. You can learn Prinz's true story in in I Shall Not Be Silent.

Starting Sunday, March 29th at 10 am EST and ending Sunday, April 5th at midnight EST, visit https://vimeo.com/78217773 to stream I Shall Not Be Silent for free.