The Pursuit of Racial Equity & Integration – A 25-year Journey

In March of 2022, we honored our 25 year history of intentional racial integration, equity, and inclusion with an event and podcast series that share the stories of individuals committed to the mission and give general history of this ongoing journey to build racially inclusive and stable communities. The event included a moving video history of the founding of the organization told by the people who made it happen. The live panel moderated by WNYC’s Nancy Solomon offered more details about current work and why trustees and volunteers are so passionate in their support of the mission. The podcast, Light the Way, is a series with host Rev. Liz Testa about our community's commitment to racial equity and integration, where people of different backgrounds are welcome and active in all aspects of civic life. Each interview is a candid conversation that dives deep into personal experiences and shines a light on the relentless work of the South Orange-Maplewood Community Coalition on Race over the last quarter-century.

In 1996, residents of South Orange and Maplewood came together to dialogue and develop constructive solutions to address issues related to changing demographics and negative perceptions based on stagnant property values, perceived white flight and a belief that the quality of our school system was in decline.

Discussions among a group of concerned residents led to the formation of an intergovernmental task force which incorporated as the private/non profit Racial Balance Task Force, which subsequently became the Community Coalition. The Task Force was able to draw on work done by earlier organizations – Maplewood Friends, South Orange Neighbors and the combined Friends and Neighbors – which provided important historical data and indicated community willingness to explore important issues around race, economics, and housing. Additionally, the Task Force drew upon the expertise of Fund for an OPEN Society, a national organization, which works with communities on intentional integration efforts.

The Racial Balance Task Force identified several “resource” principles from which to work:

The Coalition adopted as its goals the development and implementation of three key strategies: to promote strong and sustained robust demand by all racial groups for housing in every area of our community; to take proactive steps to ensure involvement of persons of color in the civic life of our community; and promote dialogue and understanding on race-related issues.

Since 1996 we have seen a renaissance in our two towns thanks in part to Coalition initiatives: an aggressive marketing program to tout our communities through targeted media outlets; tours for potential buyers interested in purchasing homes in our community; 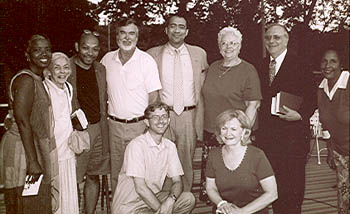 collaboration with neighborhood associations and other civic organizations to promote more inclusiveness; “planning ahead” workshops for parents of middle school students; and hosting of forums and guest speakers to discuss race-related issues.

Initially, the two town municipalities fully funded the Coalition. The Coalition has initiated an aggressive fund development campaign, to lessen our reliance on municipal funds. Now more than 65% of our funding comes from private donors, foundations and other grant sources, and fund-raising events.

In my own mind, I call my work with the Coalition political activism. We are not just helping out; we are attempting to make change in our local towns, which will lead in the long run to change in the larger society. I do this work for the Coalition because it is personally satisfying (I’ve made a lot of friends), but at the same time because I believe it is a way to fight structural racism in the United States. — Meredith Sue Willis, Coalition Chairperson 2004-2005

[To me, the Coalition is] another vehicle to shape the future of South Orange/Maplewood with a common goal – living in a harmonious integrated community where all facets of life include and value all – regardless of race, ethnicity or life style. The bonus [of volunteering] is working with a representative group of talented, committed neighbors from both towns! — Carol Barry-Austin, Vice Chairperson.