Residents & Police Address 'When Should I Call the Police?' 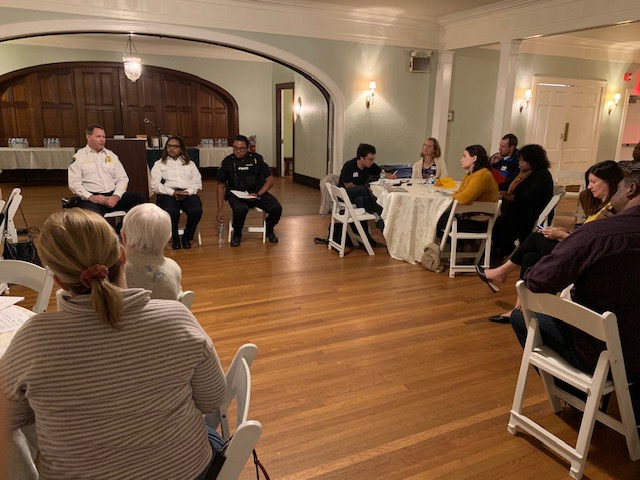 The Coalition hosted 4 discussion tables at the Coffee House Discussion: When Should I Call the Police. After meetings with the police chiefs and following community concerns about when and why people call the police, Coalition trustees suggested a Coffee House Discussion to provide the safe space for people to have a dialogue about what might, in their minds, be a reason to call the police; why someone might hesitate to call; what concerns people have about their own protection or in putting someone at risk. Our goals were to get people face to face in dialogue, taking the conversation beyond social media posts, and to get people thinking about their biases in assessing the need for police support.

We are grateful to all those who attended—most especially Chief DeVaul, Lieutenant Niheema Malloy, and Sergeant Adrian Acevedo. The attendees shared experiences and worked through some questions that they then shared with police who addressed their concerns. Listed below are some of the highlights. Note that this is a beginning and the intention is to share the confusions and concerns with the local police, the Maplewood Community Board on Policing, and the South Orange Safety Committee to support their efforts to provide the best support and guidance to the community.

Concerns that were shared included:

Some suggestions that came from the attendees included:

Chief DeVaul, Lieutenant Malloy and Sergeant Acevedo offered some responses that may be helpful in evaluating what rises to the level of police involvement and in clarifying the use of 911 or other services: