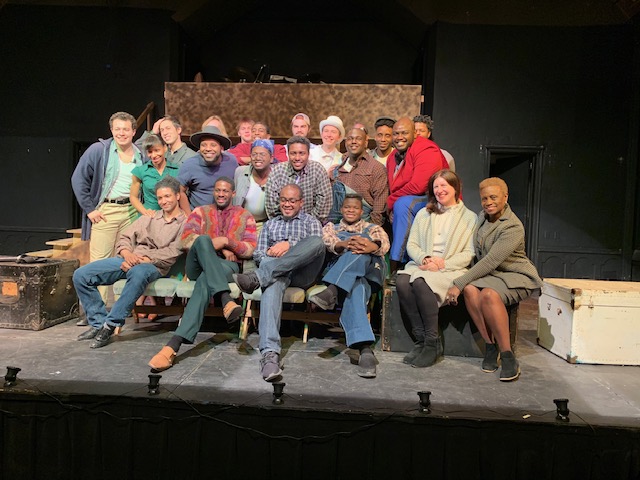 In collaboration with Progressive Theater and with a grant from the Essex County Local Arts Program, the Community Coalition on Race sponsored four performances of The Scottsboro Boys--a provocative musical about the nine black teenagers falsely accused of raping two white women aboard a train near Scottsboro, Alabama, in 1931. The stories of these wrongfully convicted young men is famous for the tragic outcomes of the accused, for multiple miscarriages of justice, and for the landmark Supreme Court legal decisions that resulted from the trials. But, this production transforms those boys from convicts to real people.

The musical was produced on Broadway in 2010 and it received 12 Tony nominations. It also received both criticism for using the minstrel show format and blackface in some scenes and acclaim for using those same forms to confront racism. The writers noted that their intention was to use minstrelsy to show the evils of that tradition and the evils of a justice system that offered no justice to Black people.

The story itself is painful for most people to hear even in a straightforward historical account and, not surprisingly, portraying it in a musical format adds another dimension to being unsettled by the tragedy. As one young audience member pointed out, you don’t know whether to applaud the mastery of the actors or to cry at the pain and huge miscarriage of justice you are witnessing.

Each post-performance talk-back captured this tension and offered opportunities for the audience to reflect along with the actors and the director on the musical and dramatic recounting of the story, the persistence of these tragedies even today, and on the importance of acting on behalf of racial justice.

We are so very grateful to Gregory Osborne, Founder and Director of Progressive Theater, for bringing this production to us as part of our Integration through the Arts programs for Black History Month. This is our second year collaborating with Mr. Osborne who brings his personal vision to “create opportunities and platforms for the misrepresented: minorities and women while offering the necessary training to further a career in the arts” to every performance. We thank the Township of Maplewood for their support and for the use of the Burgdorff Cultural Center. Thanks also goes to both the Essex County Local Arts Program and the Fraentzel Foundation for their support.