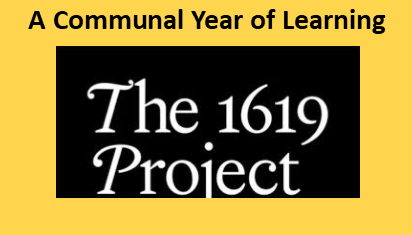 The Community Coalition on Race and SOMA Action hosted their first discussion group of the 1619 Project Year of Communal Learning series November 14th at the Maplewood Memorial Library. This first discussion was on the Racial Wealth Gap. Barbara Velazquez and Tina Kelly gave presentations highlighting the stark disparities nationwide and the even deeper disparities that exist between Black, Latino, and white people in New Jersey.

Nancy Gagnier opened the evening by noting that "In 2016, 8 years after the onset of the Great Recession, White families in New Jersey had a median net worth of $309,000, a huge contrast to the $7,020 median for Latino families and $5,900 median for black families. Home ownership is a driver of wealth. With a fall in home ownership among Black and Latino families, we are left questioning what we can do alter that course."

Tina Kelly began the presentation with a brief and powerful history of reparations and the failure—often intentional—to keep wealth and the means of accumulating wealth out of the hands of Black people. She noted that the Fair Labor Standards Act, Welfare Programs, Social Security, and the Fair Housing Act, among others, often created more barriers to gaining wealth or were designed to advantage white people. She concluded with a list of potential solutions suggested by various leaders and institutions, including loan forgiveness, increasing home ownership, child savings accounts dedicated to education and home ownership, baby bonds granted to African Americans, and Individual Development Accounts.

Barbara Velazquez gave a presentation that demonstrates in real numbers the racial wealth gap, defined as the absolute differences in wealth between the median black and white households as well as between the median Latino and white households. She concludes with the observation that “popular explanations for the racial wealth gap, looking at individual differences in education, family structure, full- or part-time employment, and consumption habits. In each case, we find that individual choices are not sufficient to erase a century of accumulated wealth.” Read the full report here.

The attendees then spent time in discussion together to generate ideas for taking action to change the systemic barriers to wealth accumulation by Black people and also to commit to working on these efforts. Some of the ideas generated included:

Stay tuned for the next in the 1619 Project Communal Learning series!