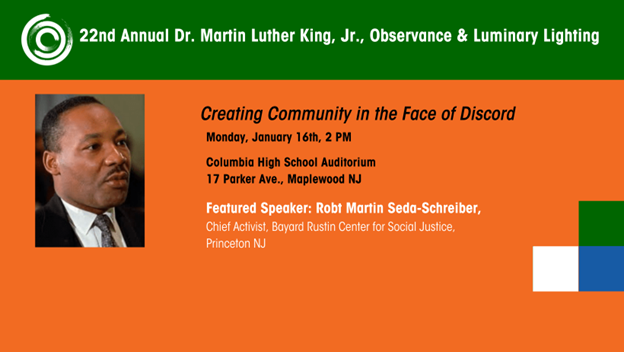 We returned to an in-person observance this year which brought out hundreds of people to honor the legacy of Dr. Martin Luther King, Jr. The messages delivered by all were stirring calls to activism, volunteering, and making progress on the mission of racial integration, equity, and inclusion. The keynote speaker was Robt Martin Seda-Schreiber, chief activist at the Bayard Rustin Center for Social Justice in Princeton; Village President Sheena Collum, Mayor Dean Dafis spoke, Erin Scherzer and Kasia Piekarz from the Maplewood Community Board on Police, and CHS MAC scholar Melissa Dubuisson. The CHS Special Dance Co. and CHS Chorus performed.

Seda-Schreiber spoke about Bayard Rustin's contribution to Dr. King's work: “So many folks conveniently forget about him. Here he is raising up an early, powerful prototype of intersectionality some 20 years before Dr. Kimberlé Crenshaw coined the term. Bayard Rustin planned the march, brought nonviolence to the movement, inspired the Freedom Riders and spoke truth to power. He was lost to history, edited out of the books and excised from the stories told because of who he loved and who he was, a queer black man embracing his identity and all his beautiful intersectionality.”

The observance closed with MAC Scholars leading kids down the aisles with their luminaries--all decorated with messages of peace and hope--to launch the community-wide Luminary Project for the evening.

There are so many people to thank who make this event so inspirational:

Thank you to our district preschools, Clinton 2nd grade, MAC Scholars, Greater Essex County Chapter of Jack and Jill of America, Inc, and all the volunteers who helped to make kits. Enormous gratitude to South Orange Village President Sheena Collum, for being a champion of the Luminary Project since day one, and for hosting our decorating party along with Maplewood Mayor Dean Dafis. We truly appreciate the support of both leaders.